We were at Avast here in Seattle, where most of the new Band of Horses album Cease to Begin was recorded and mixed, and left with a bit of time on his hands, singer/songwriter Ben Bridwell kept himself busy with a crossword puzzle. He burned through most of it in just a few minutes. And though I was trying to focus on the music I was hearing for the first time, it was hard not to notice that the kid I’d met years ago (as a member of Carissa’s Wierd and as the person putting out CW records through his Brown Records imprint), and whose music I’d loved for so long, wasn’t just a great musician but also had a remarkable facility with words. And, of course, it made sense: he’s a talented lyricist. From the concisely conveyed sense of interconnection (and longing for it) in “Ode to LRC,” to the emotional complexity achieved through simple means in “Detlef Schrempf,” the new album is filled with examples. And the album’s opener, the soaring, athemic “Is There a Ghost” shows the band, together, at the height of their considerable powers.

Released in March of 2006, Band of Horses’ debut Everything All the Time made good on the promise hinted at in their early shows and demos. The band went from early shows opening for friends Iron & Wine, to playing on The Late Show with David Letterman by July, and being nominated as one of ten finalists (along with Joanna Newsom, Beirut, Tom Waits, and, the eventual winner, Cat Power) for the Shortlist Music Prize for that same year. And the record was well-received critically, with celebratory press in Spin, Entertainment Weekly, NY Times, Harp, Billboard, Pitchfork, Magnet, NME, Uncut, and a slew of others. Not a bad place to start.

For a lot of reasons, Cease to Begin is the perfect title for this new record. Not only do the songs themselves weave this theme through the record, but stopping and starting anew is also a reflection of the past year and a half for Band of Horses. Though they worked with producer Phil Ek again, as they did on Everything All the Time, much has changed between the fairly recent then and now. There have been band members who have come and gone, including Mat Brooke, who left the band to pursue other interests and his own band. For core members Ben Bridwell, Rob Hampton and Creighton Barrett, there has been a move from Seattle, WA to Mt. Pleasant, SC, a relocation that had been planned for some time so that they could all be closer to their families. And, close friends and family have come and gone—some far too early. Necessarily shot through with these experiences, the songs on Cease to Begin are strikingly beautiful, if less elliptical and more straightforward, with more sophisticated arrangements than the last record.

I’ve always thought that the thing that sets Band of Horses apart from so many other great bands, is that the music makes you feel something. It’s an experience and it’s what I consider truly soulful or devotional. It comes from the heart and it’s a gift that not too many are blessed with. Ben’s voice carries a feeling of both strength and vulnerability and it captures the very essence of the human spirit, the reconciliation of attachment and detachment, the strength that’s found through suffering, and the understanding that we are as significant as we are insignificant. This is what Cease to Begin is all about. 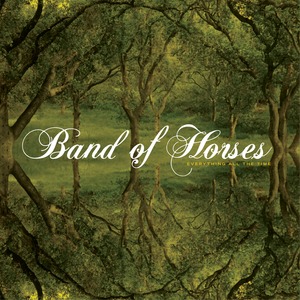 Everything All The Time