Stab the Unstoppable Hero is the second full-length album (courtesy of Sub Pop) from Los Angeles power pop alchemists Arlo. “Power,” here implying both electrified and sizzling like a live wire; “pop,” implying that particular cereal box optimism that stems from clever children who grow up into sardonic and lethally charming adults (or, as in the case of Arlo, mildly aged and road-seasoned teenagers). Impatient and bouncy, Arlo spend entirely too much time listening to garage (music) and/or, living in one, breathing some form of asbestos. They’re nice quiet fellows, full of harmony and hormones.

Nate Greely and Sean Spillane (singers and guitar players, the both of them) come from the South (Texas mostly). Nate’s dad is a Cajun fiddle player and Sean’s dad is an oceanographer, which is superfluous information, but it’s interesting isn’t it? The boys met while attending college in L.A, where understandably they began playing college rock. After graduating, Nate and Sean were off to Pasadena where they came across and adopted into the Arlo fold Shmed (bass) and Soup (drums), both formerly from the band Holliston Stops. In January 2001, Arlo’s full-length debut, Up High in the Night was released and the band toured like crazy to spread the word. Somewhere in the midst of all that touring, former Further/Beachwood Sparks drummer Tom Sanford joined Arlo officially, replacing our old pal Soup and strengthening an already formidable force. Which, pretty much brings us up to now:

Stab the Unstoppable Hero builds upon the groundwork laid with Up High in the Night, adding new warp and weave to the band’s pop-rock landscape (ref. the twang provided by erstwhile Further/Beachwood Sparks guitarist Josh Schwartz on “Up”). Unlike the debut which was self-produced and recorded completely at home, Stab the Unstoppable Hero is a co-production with Ben Vaughn, and includes songs written by Shmed, who is a dangerous Beatles freak. It’s this danger, a refreshingly defiant optimism and the aforementioned live wire power that arm Arlo as they stab the unstoppable hero. So, join us, bet on the underdog for a change, take a few pokes at Goliath. After all, it’s just this kind of willingness to put yourself in peril that proves you’re alive. “Peril,” implying the momentary air-borne drop of a roller coaster. 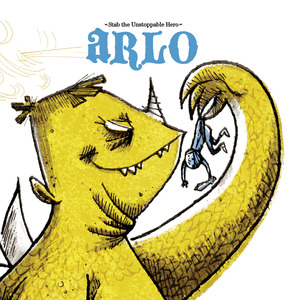 Arlo Up High In The Night CD / Digital