Amen Dunes (aka the project of Damon McMahon) returns with “Feel Nothing,” a powerful and honest first statement since the release of 2018’s beloved Freedom, and his debut release with Sub Pop. Recorded in Los Angeles with co-producer Ariel Rechtshaid and mixed by Craig Silvey, “Feel Nothing” begins with McMahon’s unmistakable voice chanting “Kingdom, kingdom, kingdom, kingdom, kingdom // be a prophet” until the Sleaford Mods rhythm drops and McMahon continues “Every time I hear a story // Got no good from it.” The song, which features synths by Freedom-collaborator Panoram, gradually introduces the rhythm-heavy next chapter in the Amen Dunes’ sound, before a duet by Sleaford Mods’ Jason Williamson and McMahon carries the song out. Where Freedom was “[Amen Dunes’] euphoric breakthrough … silvery and romantic, like a hallucination of the classic-rock songbook” (Pitchfork), “Feel Nothing” is a bold reflection on resistance, and a step further in the intentional reimagining of the world of Amen Dunes. 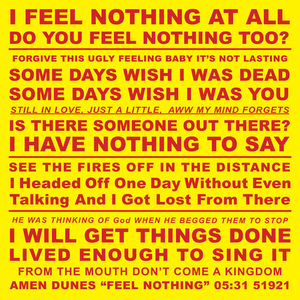