Dave Scher and Jimi Hey, hail from Los Angeles, California, and have known each other since 1995, when a 16 year-old Hey would call Scher’s late-night radio program on KXLU requesting Six Finger Satellite on a repeated basis. This KXLU connection led them to playing music together in Bee Venom and later resulted in the formation of the more psychedelic country-minded Beachwood Sparks. In between leaving the group in 1997 and rejoining it in 2002, Jimi also turned up in groups such as Strictly Ballroom, Tristeza, Glass Candy and the Shattered Theater, and The Rapture. The two have also moonlighted as members of Lilys. After completing the Beachwood Sparks tour of summer 2002, Dave and Jimi joined forces to create All Night Radio, a band in which they could throw off the musical shackles, so to speak. They have dubbed this new sound the “Spirit Stereo Frequency.”

Dave and Jimi spent the past year cultivating and developing their new sound in their living room studio, infusing their new songs with an ever-changing synthesis of traveling sounds from the Natural and Supernatural worlds. With the help of a deranged assortment of modern and primitive equipment, the boys tuned in to the Spirit Stereo Frequency…an Omnichronistic Music Source coming in non-stop, on bandwidth signals from the sun, in a collision of displaced sound styles from the present, past, and
future.

So do tune in, and your molecules will remember the sound of yet to come! 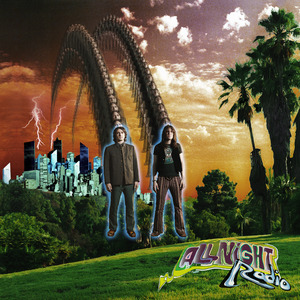