Alright, you got us, THUMPERS’ “Unkinder (A Tougher Love) isn’t officially the catchiest song of 2014. There is no empirical evidence supporting that bias-soaked assertion, but between some heavy radio play in Los Angeles and Seattle, the amount of times it comes blaring out of individual Sub Pop cubicles per day, and the fact that it’s been securely lodged in my head since the very first day that I heard it, I feel pretty comfortable making the claim that “Unkinder” is in fact, the catchiest song of 2014.

So, if you listen to the radio and live in LA or Seattle, be prepared to be pleasantly infected by the sound of THUMPERS.

Seattle’s 1077 The End ‘s has picked the track for it’s “Discover & Download” feature.

And in LA, ALT987FM has named the track it’s “Best New Song of the Year… This Week”

“Unkinder (A Tougher Love)” is just one of many massive pop songs that populate their debut record, Galore, out now on Sub Pop Records.

In related news, you can now listen to THVMPERS cover of “Lungs,” originally recorded by former tour mates and friends of the band, CHVRCHES. For a great time, press play on the embedded video player.

Pick up Galore from your friends here at Sub Pop Records.

Putting out a band’s debut record is a proud moment for the (not terribly proud) people of Sub Pop Records, and the London-based band THUMPERS’ debut, Galore, is no exception. Galore is an immediately engrossing, hopelessly catchy record that we’re stoked to stamp with the catalog number SP1062. If you order the record on LP from the Sub Pop Mega Mart, you’ll receive your copy on the limited, colored-vinyl Loser Edition of Galore. This is a classic while-they-last scenario, so order quickly!

THUMPERS, one of Sub Pop’s newest familial additions, have a debut record coming out in just a handful of days. The album track, “Unkinder (A Tougher Love)” has been out there for a little while now, but with it’s massively catchy sound and shimmering vibes, it hasn’t had a proper visual accompaniment until now. So, press play, and let your eyes and ears gorge upon the audio and visual feast that THUMPERS bring in the embedded player.

Galore is streaming in its entirety all week courtesy of the fine folks at NPR Music. Head on over there to hear what the rest of this triumph of a debut record has in store.

If you pre-order Galore from us here at Subpop.com, you will receive a bonus CD with 4 extra tracks not on the record, including a cover of a song by recent tourmates CHVRCHES, performed by THUMPERS! Customers who pre-order the LP will receive the limited, colored-vinyl “Loser Edition” of the album. 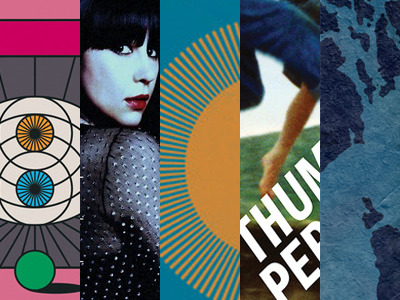 Sub Pop’s third annual 20’s Plenty Holiday Sale is quickly approaching its end, and if you haven’t heard about it yet, you’re doing a remarkable job of ignoring us (kudos to you, sometimes I wish I could ignore us), because we’ve been pretty loud about the money that we are desperately trying to save you by convincing you that now’s the time to spend all of it at our online store. So, before your opportunity to magically turn your money into long-playing Sub Pop records at the greatly discounted rate of 20% off goes away for another year, we wanted to tell you about a pretty special fact: not only is EVERYTHING THAT WE SELL 20% OFF WHEN YOU SPEND $20 OR MORE, but all five of the 2014 Sub Pop records that we currently have available for pre-order are 20% off, too! Future records available at the sale price of today! Now, I’m not sure if you know how stock options work, but this is essentially what’s happening here. Invest like a CEO, pick up brand new records at an appreciable discount from Mogwai, The Notwist, Death Vessel, THUMPERS, and Dum Dum Girls, and shop the rest of our sale here.

You guys, BIG NEWS. We’ve successfully bamboozled a very, very talented UK band called THUMPERS into agreeing to release their debut record with us, Sub Pop Records. Those fools. As a preview of what’s to come with their forthcoming record, take a listen to the insanely catchy track “Unkinder (A Tougher Love)” in the blog post-accompanying player. It’s been playing all over the Sub Pop office for weeks now—it’s that catchy.

THUMPERS will tour Europe this fall as direct support for Glaswegian-band Chvrches. The tour begins October 10th in Glasgow, UK at o2 ABC and ends on October 30th in Stockholm, SE at Debaser. Preceding the tour the band has a handful of dates to mention including October 8th in Dublin and October 9th in Belfast supporting Everything Everything.