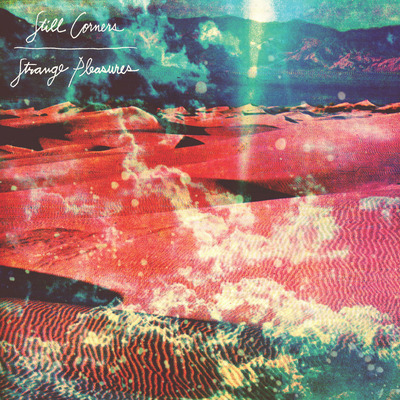 Still Corners’ follow up to their 2011 debut record, Creatures of an Hour, came out today. It’s called Strange Pleasures, and the lushness and warmth of the sound that emanates from the record make for the perfect sonic companion for the seasonal transition into what we in these parts call “the good living” months.

We have a small handful of the limited, colored-vinyl LOSER Editions left for people who order the LP from us. This will also be available in select independent music retailers (call yours for availability).

Listen to the entirety of Strange Pleasures in the handy player accompanying this post.

Alright, we are smack-dab in the middle of a good news/good news situation regarding Sub Pop recording artists Still Corners. Let’s splurge the best news for first: Still Corners have a brand new record (and t-shirt!) called Strange Pleasures coming out on this very record label on May 7th! If you pre-order Strange Pleasures, you’ll receive a limited-edition scrap book featuring pages taken directly from Still Corners’ lyric book as they were writing the record as well as images from the recording process. People who pre-order the record on LP will receive the colored-vinyl, limited Loser Edition version of Strange Pleasures. And as is the nature of limited things, the sooner you order, the better, as they will run out!

Today we have a brand new Still Corners track, “Berlin Lovers,” off their upcoming album, Strange Pleasures (out May 7th, 2013). Listen to the track in the player above and enter your email to receive band updates via their email list! More on Still Corners coming soon, stay tuned.

Still Corners announced today that they will be releasing their next single, “Fireflies”, as a limited edition 7" which they will sell on their forthcoming EU tour (which starts October 25th, full dates listed below) as well as having a few copies available via their Big Cartel storefront starting today.

This new single will be available directly through the band but you can still find the Still Corners full length, Creatures of an Hour and their previously released 7", “Cuckoo” right here on Sub Pop’s artist page for Still Corners.

The band is streaming “Fireflies” over on GorillavsBear today as well, take a listen!

More on Still Corners can be found on their subpop.com artist page.

Check out Still Corners’ artist page for tour dates and free MP3s too!