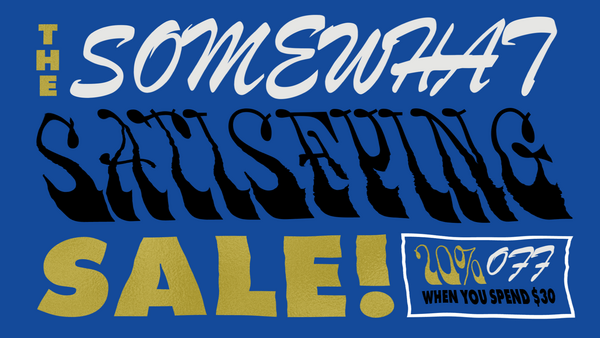 Each and every year we come to you with an irresistible deal around the time of year commonly referred to as “the holidays.” This year is evidently no different! As a sign of our gratitude we are inviting you (our ever so enthusiastic customers friends) to shop our Somewhat Satisfying Sale, where we are offering our high quality music and merchandise at a discounted rate!

What is eligible? Everything in the shop is eligible for this 20% off, except gift cards and Singles Club Vol. 8 subscriptions.

What items in particular would we describe as satisfying, you ask? New releases from Weyes Blood, Beach House, Father John Misty, Frankie Cosmos, Built to Spill, Suki Waterhouse, and so many more have us feeling fulfilled this year. We’re also pretty content with our new Sub Fuzz Sweatshirt and Flannels.

Why only “somewhat satisfying”??!

All orders placed by/on December 16th are guaranteed to ship out before we close up shop for the year, so get your orders in early and often.  Related to this impending warehouse closure, any orders placed between December 17th and January 1st will not ship out until after we are back in operation on January 3rd.

Thank you in advance for your continued support and patronage (different and much more financially satisfying to us than all that patronizing…). May the end of your year be filled with happiness and also Sub Pop merchandise!

“If you were to ask me what my religion is I would say 3 things: Music, Art, and Nature. Those are the things I’ve dedicated my life to and which bring me the purest of joy,” Thomas explains. “Often when I’m making art or music I feel something guiding me- call it god, call it Magic, call it Jim… whatever it is, it makes me happy! My god is probably something totally different than yours, and that’s a beautiful thing! I was thinking about that one day, so I wrote this song. What does your god look like? Is it a frog sitting atop a mushroom? A fifteen headed cobra? A swirling vortex? Old white guy with a long white beard is the only wrong answer!”

At the core of Smalltown Stardust lies Thomas’s desire to commune with nature on a spiritual level. Images of the natural world, from blizzards to green mountains to cloudy days, fill the songs and create a setting unmistakably far away from Los Angeles, as evidenced in the “Portrait of God” video, shot in the rainforest on the Olympic Peninsula. “It’s one of my favorite places on Earth, perhaps the most magical forest I’ve ever seen! It was honestly hard to concentrate on making the video when there was so much mossy love around us,” says Thomas. The video, directed by Nicola and Juliana Giraffe, co-stars SASAMI, who also co-wrote and co-produced the album.

Last month, King Tuff announced the album with a video for the title track “Smalltown Stardust,” which Consequence praised as “a triumphant return,” Rolling Stone called a ‘Song You Need To Know’ and Paste named one of the ‘Best Songs of the Week’ saying it’s “warped in unexpected ways.”

King Tuff is hitting the road next year in support of Smalltown Stardust. The North American tour kicks off March 1st in San Diego, CA and wraps April 7th at Joshua Tree, CA with a show at Pappy and Harriets. All dates below.

There are times in our life when we feel magic in the air. When new love arrives, or we find ourselves lost in a moment of creation with others who share our vision. A sense that: this is who I want to be. This is what I want to share.

The result is Smalltown Stardust, a spiritual, tender and ultimately joyous record that might come as a shock to those with only a passing knowledge of the artist’s back catalog. On Smalltown Stardust, Thomas takes us on his journey to a place where past and present collide, where he can be a dreamer in love with all that he sees. Images of his youth abound.

In the end, Smalltown Stardust is not merely a nostalgia trip. In making the record, Thomas not only conjured a special time in his life, he found new inspiration, surrounded by a small circle of collaborators and a sense of love and wonder for nature. If the first King Tuff record was content to merely state Thomas was no longer dead, Smalltown Stardust is a paean to what that life means. A statement of belief and a hymnal to the magic still to behold all around us. “I’m a different person now than I was 20 years ago when I first started it. But oddly, when I first started the band, it was more like this,” he says. Which is to say, things have come full circle.