Multimedia auteur Chad VanGaalen has delivered a phenomenal animated video for “Samurai Sword,” (premiering on YouTube + Adult Swim’s Toonami) the first single from World’s Most Stressed Out Gardener, his new album — out on CD/LP/DSPs March 19th, 2021 worldwide through Sub Pop and in Canada from Flemish Eye. The thirteen-track effort, which also features “Nightwaves,” “Starlight,” “Where Is It All Going?,” and “Flute Peace,” was written, performed, recorded, and mixed by VanGaalen at his Yoko Eno Studio in Calgary, Alberta, and mastered by Ryan Morey in Montreal, Quebec.

VanGaalen says of “Samurai Sword,” “I had just ripped a bunch of old leaking copper pipe out of my basement in a reno job that I jumped into willy nilly. Realizing how magical the pipes sounded, I put them on some dirty styrofoam and banged out the janky beat that introduces the song! Garbage is life.”

He continues, “It just spilled out in a couple minutes. I didn’t try to stop it because I was smiling like I was just cruising through my neighbourhood. Simple like a sandbox. An ode to the simplicity. It’s hard to let things be simple. But simple is easy on the mind, and being jovial in song is something I find really difficult. Why? What?”

As for the “Samurai Sword” video, he elaborates, “I was drawing black and white plant backgrounds for this song because of the great old samurai movies of the past. I like how nature sometimes takes the lead. I was getting all knotted in my mind about the sky. I looked at my dad’s watercolor paintings of a sky, and felt like I couldn’t get the feel right. So, I just borrowed his sky for a scene and then I realized that my dad’s paintings were perfect and already full of real life energy. I used them to finish the video and felt like we got to go on this quest together. In my mind. Fuck time.”

The video for “Samurai Sword” gives viewers a peek into VanGaalen’s surrealistic world, expanding the 2:04 album version to a gloriously weird extended version with a 3:39 run time, and can now be viewed via VanGaalen and Adult Swim’s YouTube channels. The video will also see its broadcast television premiere on Adult Swim’s Toonami, the network’s popular weekly anime programming block, on Saturday, January 30th.

VanGaalen has also created the “Samurai Sword Scavenger Hunt” contest, with Easter eggs hidden throughout the video. He’s sharing a list of some of these hidden objects every week, and challenging fans to find them. He says, “To stop myself going squirrely over the last few months, I started hiding things as I animated this video.”

Every week for the next three weeks (through February 18th, 2021), one lucky person will win a prize pack of stuff from VanGaalen, including a copy of World’s Most Stressed Out Gardener, as well as some unique personalized items made by VanGaalen himself. At the end of the contest one person will be awarded a grand prize (You need to enter all three phases to win the grand prize!). To enter, please visit https://chadvangaalen.com/samuraisword.

World’s Most Stressed Out Gardener is now available for preorder through Sub Pop. LPs purchased through megamart.subpop.com, Flemish Eye (Canada), select independent retailers in North America, in the U.K. and in Europe will receive the album on orange gold vinyl with blue/red trails (while supplies last). There is also a new T-shirt design available. More on Chad VanGaalen’s World’s Most Stressed Out Gardener by Sean Michaels:
2020 was a terrible year for gardening. It was terrible for peppers, it was terrible for tomatoes, it was terrible for the condition of the soul. But Chad VanGaalen somehow raised a garden all the same: carrots and sprouts and broccoli and a revivifying new album, all of them grown at home. He likes to eat directly off the plant, he says—”I get down on my knees and graze. It’s nice to feel the vegetables in your face”—and the 13 songs on World’s Most Stressed Out Gardener were harvested with just such a spirit: in their raw state, young and vegetal, at the very moment, they were made (read more at Sub Pop). 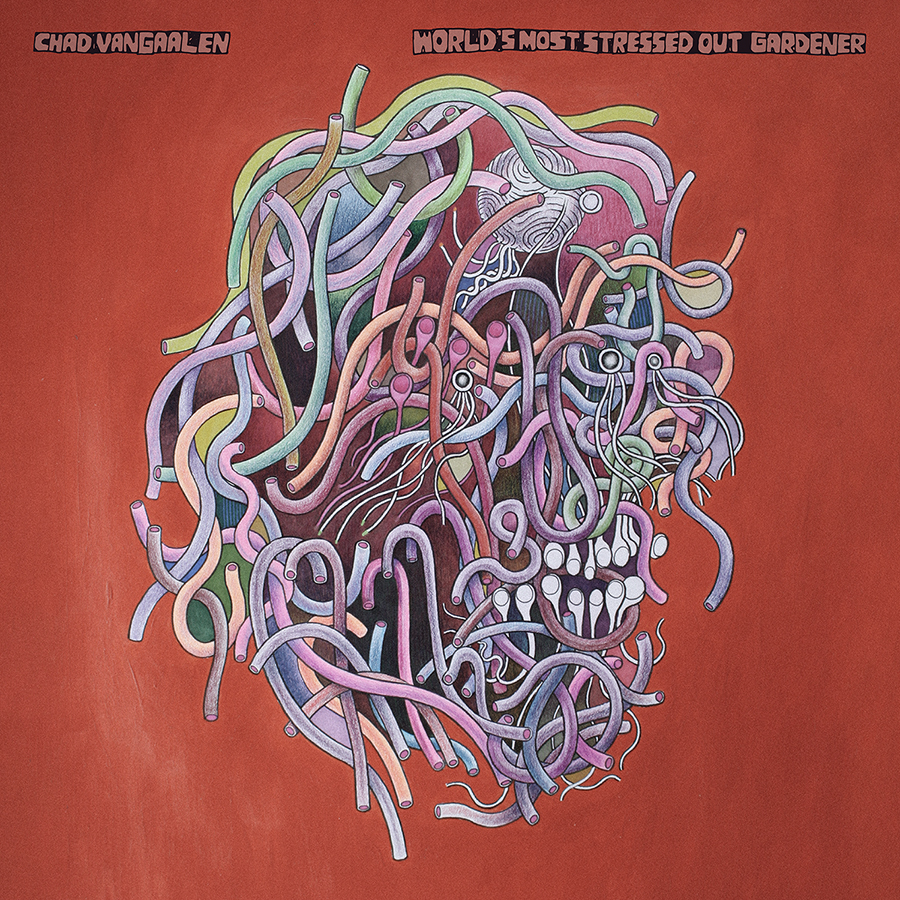