Shabazz Palaces are sharing the official video for “Déesse Du Sang” from their acclaimed 2017 release, Quazarz: Born On A Gangster Star. The ominous, slightly NSFW visual, is directed by returning director Stephan Gray (“Dawn In Luxor,” “Since C.A.Y.A.”).

Shabazz Palaces European and UK tour dates in support of Quazarz Born On A Gangster Star, and Quazarz Vs. The Jealous Machines have been extended through February 2019. Beginning November 17th in Skopje, Macedonia and ending December 3rd, 2018 in London at O2 Arena, the group will support Ms. Lauryn Hill on the EU/UK edition of “The Miseducation of Lauryn Hill 20th Anniversary Tour.” Then in early 2019, Shabazz Palaces will return to the EU/UK a string of headlining dates beginning February 4th in Rotterdam at Bird and ending February 7th on London at Jazz Cafe. 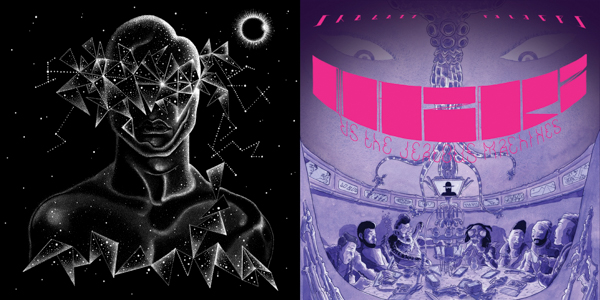 Quazarz Born on a Gangster Star and Quazarz vs. The Jealous Machines, the group’s third and fourth albums released in 2017, are available now on CD / LP / DL / CS / Illustrated album worldwide through Sub Pop [purchase it now here].

“The power of Quazarz: Born on a Gangster Starand Quazarz vs the Jealous Machinescomes from the way they spike their dense, abstract sound with moments of accessibility: a band broadening what they do without blunting their edge or losing their uniqueness.” - [4/5, Album of the Week] - The Guardian

“The pair’s music sounds like rap music viewed through a prism - a psychedelic reverie of glittering electronic textures and unconventional beats that’s sensual, expansive and disorientating….Like interstellar guides, they’re always positioned a little further out than their peers, and these two records offer suggested routes to an infinity of possible futures.” [8/10] - Uncut

“These exquisite new sonic meanderings conjure up the ghost of Speakerboxxx/The Love Below.” [Record of the Month] - London In Stereo

“Both of Shabazz Palaces’ new albums are meticulously crafted, with an obscure narrative and arrangements so vivid they beckon you to unravel them.” [4/5 stars] -  The Skinny

“Digitally cut-up, delayed and reverberated, words tumble, swirl and spill, smearing themselves over fragmented beats and shimmering kaleidoscopic backdrops: strands of audio graffiti sprayed on walls that gleam, shift shape and then finally vanish.”  [Quazarz: Born on a Gangster Star & Quazarz vs. The Jealous Machines] - Wire