“Divination/Cleromancy/Comes the card that I refused to see” – The Afghan Whigs, “Oriole”

“Cleromancy” isn’t a word one normally finds in rock lyrics. Then again, In Spades – the forthcoming album by The Afghan Whigs, from which the new song “Oriole” hails – is defined only by its own mystical inner logic. The term means to divine, in a supernatural manner, a prediction of destiny from the random casting of lots: the throwing of dice, picking a card from a deck. From its evocative cover art to the troubled spirits haunting its halls, In Spades casts a spell that challenges the listener to unpack its dark metaphors and spectral imagery. “It’s a spooky record,” notes Greg Dulli, Afghan Whigs’ songwriter and frontman. “I like that it’s veiled. It’s not a concept album per se, but as I began to assemble it, I saw an arc and followed it. To me it’s about memory – in particular, how quickly life and memory can blur together.”

On the one hand, In Spades is as quintessentially Afghan Whigs as anything the group has ever done – fulfilling its original mandate to explore the missing link between howling Midwestern punk like Die Kreuzen and Hüsker Dü, The Temptations’ psychedelic soul symphonies, and the expansive hard rock tapestries of Led Zeppelin and Lynyrd Skynyrd. At the same time, this new record continues to push beyond anything in the Whigs’ previous repertoire – another trademark, along with the explosive group dynamic captured on the recording.

Indeed, the chemistry of the lineup – Dulli, guitarists Dave Rosser and Jon Skibic, drummer Patrick Keeler, multi-instrumentalist Rick Nelson, and Whigs co-founder/bassist John Curley – set the tone for In Spades’ creation. When it came to follow up the band’s triumphant return to recording – Do To the Beast (Sub Pop 2014), which was the band’s first ever Top 40 album, – the die was cast. “This is the first time since Black Love [the Whigs’ 1996 noir masterpiece] that we’ve done a full-blown band album,” Dulli says. “As the last tour wound down, Greg and I realized we wanted to keep the momentum going and roll that energy into making a record,” Curley explains. “I’m old school in that way. Having a band seasoned in playing together was how we made [classic Whigs albums like] Gentlemen and Congregation and it just felt right.”

In fact, In Spades’ crushing closing track “Into The Floor” had actually evolved out of an onstage jam that concluded Whigs fan favorite “Miles Iz Dead” every night. “People would ask all the time why don’t you record that?,” Dulli says. “One day we were like, ‘Well, why don’t we?’ And we nailed it in one take.”

Material continued to come fast and furious. Two months after the Whigs’ 2015 tour concluded, the band members reconvened at Nelson’s studio Marigny Sound in New Orleans; within a week, half of the ten songs that would make In Spades final tracklist were laid down. Something heavy clearly hung in the air. Standout “Copernicus” rocks with a thump evoking T. Rex meets Jesus Lizard, while “Arabian Heights” exudes the gutbucket exoticism of Houses of the Holy and Physical Graffiti writ large, driven by Keeler’s bravura, muscularly tribal cadences. “Rick [Nelson, who engineered the album] got incredible drum sounds, and what Patrick does on that song is a master class in drumming,” Dulli says. “It was like watching a Formula One racer move through the gears. And the combination of Rosser’s Southern grease and Skibic’s guitar acrobatics kept astounding me. Skibic is a master of atmosphere: the sounds he makes on ‘Oriole’ are like a cosmic smoke machine.”

The Afghan Whigs’ soul side also rises to new heights on In Spades, largely inspired by the lush productions of R&B genius Norman Whitfield for The Temptations and Undisputed Truth. Throughout his oeuvre, Dulli has employed horn sections to tantalizing effect since 1965, the 1998 swan song LP from the Whigs’ first incarnation – and yes, that’s a young Kamasi Washington playing on “Esta Noche” off of Dulli’s post-Whigs outfit The Twilight Singers’ 2003 opus Blackberry Belle. However, on In Spades he truly harnesses their soul power on songs like “Toy Automatic.” “I brought the horns in on ‘Toy Automatic’ for emotional devastation,” Dulli explains. “The horns pulling those long lines gave me so much power: when they come in, the song takes off, and I sing with everything I have. It might be the most unbridled vocal I’ve ever done. Every record I have a favorite child, and ‘Toy Automatic’ is that here.

In Spades also reveals a new, brutalist minimalism to Dulli’s wordplay: lines like “Don’t you cum when they come for me” and “Taste your fear/They rely on volunteers” (both from “Arabian Heights”) succinctly distill the vivid, paranoiac eroticism he’s become famed for. “Greg’s reached a place where he can now say more with less,” Curley says. “The lyrics stand on their own as written, even on the page, separate from the song.” A renowned lyricist, here Dulli revels in the play of phonetics, letting the sounds lead to imagistic, often surreal wordplay, like the provocative couplets enlivening “Copernicus”: “Listen in the distance/As the sky begins to fall/Raining down like crystalline/Apocalypse in thrall.”

According to Dulli, his recent lyrical obsessions reflect the period spent “writing these songs alongside some of the most peculiar upheavals in history” – both personal and global. Mortality was never far from his mind: “I Got Lost” was written in the wake of Dulli learning that longtime collaborator Dave Rosser had been diagnosed with inoperable colon cancer. As well, Dulli found himself profoundly affected by the recent passing of many of the icons that inspired him to make music in the first place. “It was a year of unrelenting death,” he says. “The reaper was hungry in 2016. Prince’s passing perhaps affected me the most. He was my North Star.  Watching him upped my quality control, and opened my eyes to the absolute joy and necessity of self-evolution.”

As such, while tracks like “Light As a Feather” exude the rhythmic tension and psychosexual aura of signature Whigs numbers like “John the Baptist,” other songs fearlessly enter completely uncharted waters. “The way the album sounded as it took direction was a surprise, but then with Greg, it always is,” says Curley.

In Spades in fact features some of Dulli’s catchiest material yet –  yet pointedly eschews simple verse-chorus-verse structures for ambitious arrangements and soundscapes laced with irresistible hooks, riffs, and textures. On “Arabian Heights,” Rosser thrillingly mirrors Dulli’s vocal melody with winsome slide guitar; elsewhere, “Into the Floor” suggests “The Boys of Summer” chopped and screwed with shoegaze’s lysergic sway. Most startling, though, prove the innovations of widescreen piano ballad “I Got Lost” and especially of album opener “Birdland,” with its jazzy, syncopated changes and Jimmy Scott-influenced vocal melodies.

In name and aesthetic alike, “Birdland” seems to pay homage the iconic New York jazz club that provided a crucial venue for greats like Charlie Parker and Lester Young. However, its title actually serves as a literal reference to a neighborhood in Ross, Ohio where Dulli went to school in his youth, so named because all the streets are evocatively named after birds: Finch, Cardinal, Oriole, and so on. “Birdland” commences In Spades with the line “I was a child,” placing the listener firmly in primal psychological territory. It’s a zone that Dulli has explored previously: “If I Were Going” off Gentlemen refers to a book of the same name that piqued his childhood imagination to other worlds, and Do To the Beast explored this theme as well. In Spades, however, goes even further, probing the unconscious self to its fullest metaphysical extent. “There’s a difference between nostalgia and connecting with your past,” Dulli notes. “For the last few years, I’ve been in touch with the younger me: I clearly don’t want to get too far away from that kid. I had a lucid dream about my childhood: I was watching myself as a boy in Birdland, playing basketball with my friends. I knew exactly where I was, and when I woke up from that dream, I wrote ‘Oriole.’ I thought a lot, too, about these distinct memories of when I used to ride my bike through a field near the river. I would see a place I didn’t understand, or know where it was – but I’m in that place now. I was here before I got here; I was already waiting for me.”

The joys, sorrows, and upheavals of innocence and experience echo throughout In Spades: it powerfully documents where The Afghan Whigs have been, and where they might go next. For Dulli and Curley, it’s a journey that has spanned decades – from their origins as one of the first Sub Pop acts to be signed from outside the label’s Pacific Northwest base up through the present day, and beyond. Dulli notes they were barely in their twenties when they first started the band, and yet here they are, fulfilling dreams long held and frequently realized. “Having a break from the Whigs helped me remember what made it so rewarding,” Curley continues. “When we broke up, we were burnt out and ground down, but I never stopped being friends with Greg. Over the course of a lifetime, there are constants, and there’s also change. You see who’s dropped off the vine – who’s going in reverse, and who’s still by your side. It’s interesting to see where life takes you, and where it doesn’t. That’s the journey and it hasn’t stopped.” 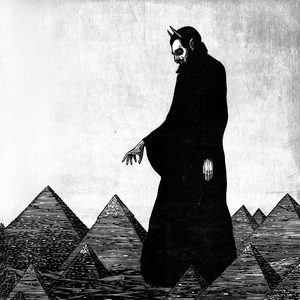 The Afghan Whigs Up In It LP / Digital / CD / Cassette